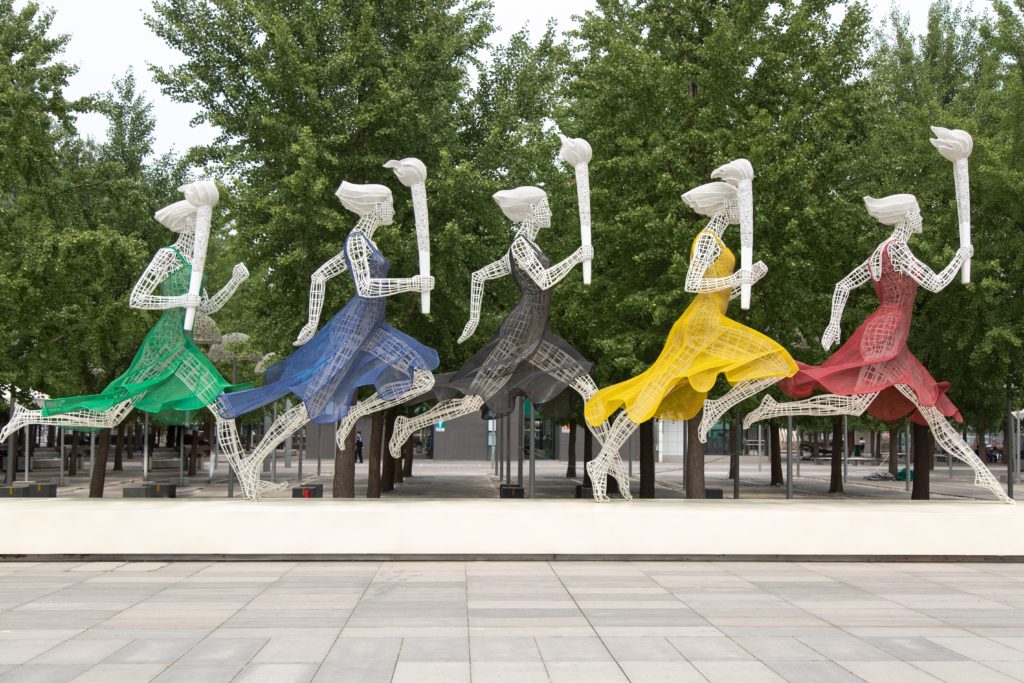 The Olympics and sexism in the world of sports

At the moment all eyes are on Tokyo, as they are hosting one of the biggest sports events in the world, the Olympics. While millions of people are following the top sporting performances of the athletes, a special focus this year is on how female athletes are being treated, as sexist scandals from the sports world gained media attention in the run-up to the event.

Immediately before the start of the Olympics, a decision of the European Handball Association´s Disciplinary Commission caused outrage as they fined the Norwegian women´s beach handball team 1.500€ for wearing shorts instead of short bikini bottoms. In their statement they speak of “improper clothing”. For comparison: Men are allowed to play in shirts and shorts “no longer than four inches above the knee”, while women must play in midriff tops and bikini bottoms “cut on an upward angle toward the top of the leg” with a maximum side width of 10 centimeters.

When hearing about the decision of the team to wear longer shorts the EHA even threatened to disqualify them. On the other hand, Paralympian Olivia Breen got called out by an official during English Championship in Bedword after her long jump for her competition briefs being too short and inappropriate.

These contradictory discriminations show that women’s bodies and the way women behave or dress are instrumentalized by patriarchal society to oppress women through arbitrary rules and to maintain power dynamics.

Looking at Olympic history, female athletes have achieved major breakthroughs towards gender equality. For example: with nearly 49 percent of female competitors, the Olympics in Tokyo this year are the most gender balanced Olympics in history.

But there are still a lot of obstacles and archaic, patriarchal rules and structures, one of the most important sports events needs to overcome:

Regarding the organizational part, the president of the Tokyo Olympics Organizing Committee, Yoshiro Mori, was replaced in the beginning of the year after suggesting that women talk too much in meetings. Two months later, the Creative Director Hiroshi Sasaki stood down after he made insulting comments about the physical appearance of a female Japanese celebrity.

Sexual violence is also a topic during the Olympics and within the world of sports.

Last week, Simone Biles pulled out of the gymnastics team final at the Olympics to ensure her mental well-being and health. She has been sexually assaulted by the national team doctor Larry Nassar as a child and in her teenage years amongst hundreds of other girls and women. The trauma of sexual violence and the post-traumatic stress disorder that potentially accompanies it and influencing the athlete´s performance is said to be a crucial part for the decision.

Prioritizing mental health above institutions and the pressure of expectation and achievement, especially as a young, black women, is a strong signal. Referring to the slow investigation of the Nassar cases by the FBI and the lack of cooperation of the American Gymnastics Federation, Biles also put the situation into terms of her sport:

“In gymnastics, if we step out of the line so many times, do you think the judges are gonna be like, ‘Well, she stepped out three times, it’s over, who cares anymore?’ she asked. “No, we’re punished. You guys should be punished.”

In relation to that, fencer Alen Hadzic successfully sued his way into the Olympic games after the US Center for SafeSport suspended him from all fencing activities for sexual assault allegation in three cases. Although his attorney rejects any of these accusations, he did confirm that Hadzic was suspended from Columbia University in 2013/14 after an investigation on sexual abuse.  For his time during the Olympics, a “safety plan” has been developed in order to keep him away from the Olympic village and other (female) teammates.

Last Friday an unusual scenario took place: Three male team members wore pink masks before their match with Japan while standing next to Hadzic as a gesture of protest and alliance with survivors. This gesture was a surprise, as it is unusual that men not only do not show solidarity with the alleged perpetrator but also publicly show it. It was a strong sign for men to speak up and do not choose to get out of the affair by hiding behind the presumption of innocence.

Also in the light of double standards during the sports event there is room to improve.

Some Olympic disciplines still exclude women, such as the 50-kilometer race walk or the Olympic decathlon which are both offered only for men. Also in terms of the dress code there are problems. The International Swimming Federation (FINA) prohibited the use of swimming caps, which were designed for natural black hair because they do not follow “the natural form of the head”.

Although the decision is currently being reviewed, the decision has not been revoked until now and does not show inclusivity and representation. It has to be seen and named as the intersectional problem it is, as the decision is especially concerning multiply marginalized persons, for example black women.

An important topic that attracted media attention in the context of the debate on gender equality at the olympics was care work of mothers. Several breastfeeding mothers, such as spanish artistic swimmer Ona Carbonell or canadian basketball player Kim Gaucher, complained before the start of the event that the International Olympic Committee and Japan´Ministry of health prohibited them to bring their infants to Tokyo due to health restrictions.

Carbonell said: “The subject was to choose between family and breastfeeding or to participate in the Olympic Games”.

After further negotiations, the nursing mothers were allowed to bring their child, but the infants would not be allowed to stay in the Olympic villages but in specific accommodations. For Carbonella, this compromise did not work, so she travelled without her son. It is important, that these topics are being discussed and that working moms are being normalized in 2021. The original decision is embedded in our patriarchal structures and not just a safety measure in covid-times, as sponsors and international media is allowed to travel to Tokyo and Japanese spectators are permitted in the venues.

While many discussions are being sparked this year and symbolic gestures are being made for more equality and we see that much has been done in recent years, there is still a long way to go and it remains to be seen how the Olympic Games as an Institution will position themselves in the future.

So while all eyes are on Tokyo, The Olympics as an Institution should show the world how to treat women/non-binary people: with respect, dignity and to provide the same opportunities as for men.

Meeting an expert in inclusive language…

Last week we got the chance to meet on the beautif

In our new blog article we explain why we believe

Thanks to @sottosopra_padova for working with us!

Our collaboration with JANAINAS e.V. Our partner

Why did you join GATE process?

And why do you work with GATE process? BECAUSE WE